Habitual Acts of Physical Violence (as catalogued by Hanshi Patrick McCarthy) represents the most fundamental forms of attacks in a one on one, empty handed fight state. Koryu Uchinadi learning is based on functional and practical self defence applications against the 36 different types of attacks identified in HAPV.

Having a broad understanding of the human body and its distinct anatomical structures and functions as well as it common anatomical weaknesses, is a pre-requisite to successful self-defence. The human body is quite predictable in how it will  react to a given stimulation eg. when punched in the stomach an opponent will bend over; when their groin is grabbed they will grab your hand; downward pressure on the back of the elbow will drop an opponent. These are known as Pre-Determined Responses (PDR). Having knowledge of the outcome of an action prior to it occurring gives a distinct advantage when faced with a confrontational situation. 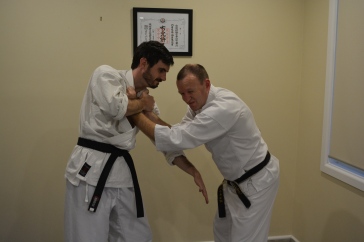 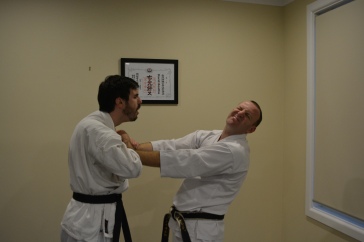 Broadly speaking, attacks can be categorised into 2 types:

The best way to learn and understand the HAPV principles is through 2 person application training, identifying the violent acts and working through the body dynamics of a technique to understand the core principles previously mentioned.